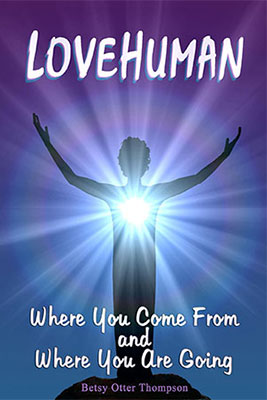 Which of the following questions have you asked yourself at one time or another?

Why am I here? What is the meaning of life? Am I doing what I came here to do? Where was I before I got here and where will I be when I leave?

Are we alone in the cosmos? If we aren’t alone, is our universe similar to other universes? Do any of them have human beings and, if they do, are they more evolved than we are or less evolved then we are? Will we ever meet face-to-face?

LoveHuman is an attempt to answer these questions and many more. While writing LoveHuman, I had had to trust that if the message delighted me and offered common sense answers to the age-old questions, it would appeal to others as well. I also had to trust that the book didn’t have to be formulaic to be readable and enjoyable; it just had to satisfy a need in the reader.

As you turn the pages of LoveHuman, keep an open mind. Be willing to look at preconceived notions from a slightly different angle. When I shifted my perceptions, I found new ways of seeing the past; and new ways of seeing the past brought resolution to old and painful heartache. As new perceptions brought healing into the present, they created new feelings. New feelings encouraged new actions, and new actions created new results.

This is the gift of LoveHuman; guidance regarding how to find comfort in a world where uncomfortable things happen. Perhaps the peace we seek is only possible on a large scale if we find it on a small scale; one person at a time finding resolutions they hope that others will find.

Had I understood this concept in my childhood, I would have saved myself a lot of heartache. Yes, I was told to treat others as I wanted to be treated, but no one ever explained why that was so important. I surmised that I should be nice because nice behavior was correct behavior. But neither niceness nor correctness was sufficient motivation when times got tough. My way of coping was to second-guess the people around me. I believed that if I could understand their motives, I could adapt my behavior to make their behavior bearable. It turned out that there was less to understand than I thought. Those who confused me the most—emotionally and spiritually—moved on to live their growth as I moved on to live mine. It seems that the so-called “truth” about everyone is a never-ending font of ever-changing information.

Because it was impossible to get others to behave as I wanted them to, I stopped looking for happiness from understanding their psyches and started searching for happiness from understanding my psyche. That turned out to be a never-ending study, too, but one that brought me a lot more satisfaction and, more importantly, was possible. The process of getting to know myself only worked when I remembered that the information I needed for the timely resolution was available to me in the people I faced each day. They offered me a mirror of who I was and what I valued in any given moment. This premise of facing myself made sense to me. It meant that if I valued self, I faced others valuing self; if I valued love, I faced others valuing love; and if I valued honesty, I faced others valuing honesty. The kicker was that, if this premise worked, I could live it in every scenario possible. And that was the motivation I needed. In fact, this theory of give/receive worked so well that the study of these physics became the building block of my life.

My personal world changed so frequently after I left home, it was easy to forget the power of common sense. The solutions I had in the past didn’t necessarily work for me in the present. The funds I had in the past didn’t necessarily follow me into the present. And the behavior I thought acceptable in the past suddenly seemed old-fashioned. LoveHuman helped me cope with this ever-changing, fast-moving culture, both on a spiritual level and a worldly level. As I lived the message in LoveHuman, I began to understand that regardless of what was happening in the world at large, the world within me determined the nature of my experience.

LoveHuman deals with many topics around the give/receive concept: our universe, possible other universes, transition, rebirth, and our presence here, and what it’s all about. LoveHuman also speaks to the subject of health, dreams, peace, and miracles. The purpose of the information is not to differentiate between fact and fiction, but to help us embrace the world as it is, and the people around us as they are—and love whatever that is. Not because it’s a perfect world, but because as we love and accept life as it is, love and acceptance grow.

We have the freedom to experiment with physics (or the power of give/receive) and we have the capability to prove its power. What greater gift is there than this gift of autonomy. It means that we create the world of our desires.

I see the picture of life—or what we view with our eyes—as an illusionary dream that changes and rearranges to help us go deeper within. And perhaps we create the Eden of our desires by the depth we are willing to go.